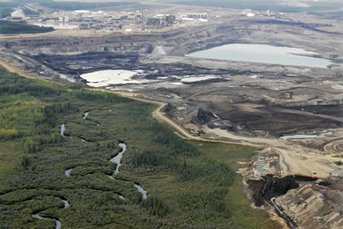 There are industries in the taiga that pose threats to many animals in it.

Logging happens across much of the taiga and has many impacts. It destroys habitat and cover for animals and also leads to soil erosion. It also however can create useful new open habitats for the animals to feed in.

Oil and Gas exploration happens as well across much of the taiga. This industry disrupts the living species in many ways. First, it cuts down the trees to make a well site which destroys habitat. In the case of the oilsands, huge masses of land can be cleared and used for extraction and also for storage of toxic tailings. As we have seen in Alberta, these ponds can kill thousands of waterfowl that are native to the taiga.

Another industry that threatens taiga species is hunting. The siberian tiger for example is almost extinct due to poachers hunting for its incredible coat. Brown bears have seen a large decline due to hunting and so have many other large mammals like the wolf, cougar, caribou, moose etc.

There are many positive things that humans are doing to help the taiga.

The Forest Stewardship Council is a logging organization that ensures that the forest it logs from are logged sustainably and safely for the people who live in the area and most certainly the animals.

The Taiga Rescue Network is an organization of over 200 organizations and aboriginal groups that strive to help the taiga. Their goal is to see sustainable logging throughout the taiga and also the creation of more protected lands in the taiga.

The World Wildlife Foundation is a huge global organization. It helps endangered species but is especially concerned for the panda, the elephant, and the tiger. The siberian tiger that lives in the taiga is on the brink of extinction and this organization has a huge influence on its future.
Powered by